Anyone who crosses paths with Albert, as a patient or co-worker, is treated like a friend and member of his family.
Supplemental Health Care
Sep 7, 2018
Share

Registered nurse, Albert Rodriguez, has been caring more with Supplemental Health Care since 2012.  Anyone who crosses paths with Albert, as a patient or co-worker, is treated like a friend and member of his family.  It is his gregarious personality and compassion for helping others that makes him such a fantastic healthcare professional.

As a teenager, Albert knew he was destined for a career in healthcare after witnessing a traumatic incident. After leaving a shift at work, he became aware that a homeless man was the victim of a hit and run accident. Albert felt helpless as he saw the man unconscious, more than 150 feet from the point of impact. Albert marveled at the work of the paramedics and knew then that he would work in healthcare.

He graduated from California State University at Fresno in 1996, and since then has worked in a variety of specialties including PICU, NICU, Med/Surg, Emergency Medicine, and the Burn Unit. 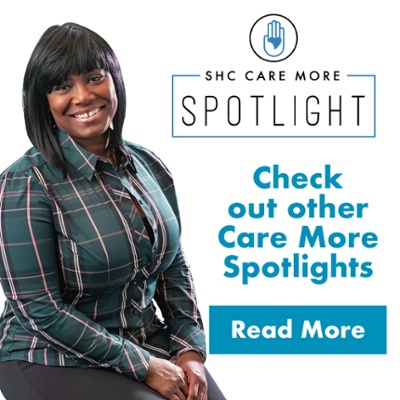 A prime example of Albert caring more and going above and beyond for his patient’s happened when Albert cared for a patient suffering from a broken radius and displaced ulnar. That particular shift was incredibly busy, and Albert had many other patients who needed critical attention.

Near the end of his long shift, Albert made sure he tended to the patient with the broken arm.  He took care of the pain and then decided he would go a step further to help his patient. Albert placed the patient’s hand in finger traps and used three IV bags to use as a counterweight to put traction on the broken arm.

The next day, upon arriving at work, Albert heard that the doctor who treated Albert’s patient from the night before wanted to talk to him. Albert initially feared that the doctor would be upset with the modified sling that he used. Instead, the doctor congratulated him for his work, and informed him that the traction worked so well, that it perfectly aligned the multiple fractures and the patient avoided surgery!

The doctor shared pictures of the setup, and the x-ray’s showing the arm in alignment, with the Emergency Department manager. Needless to say, for the next several weeks, Albert was the talk of the ER, and to this day that experience is a great source of pride for him.

Albert also takes pride in being a member of the Supplemental Health Care team and is always in attendance at company events. Not only because Albert is truly excited about life and loves having a good time, but also because he enjoys sharing stories about his home family with his work family!

Recently, Albert played a key role in saving a patient’s life, and when it was over, he proudly posed for a picture with his fellow life-savers.  Congratulations Albert! Supplemental Health Care is lucky to have you on our team!

Over the past several months, we have all read about and heard stories of the incredible work being done by healthcare..

When choosing a career in nursing, it would be inaccurate to think that there are a limited number of practice settings..